At Angkor Wat and Beyond 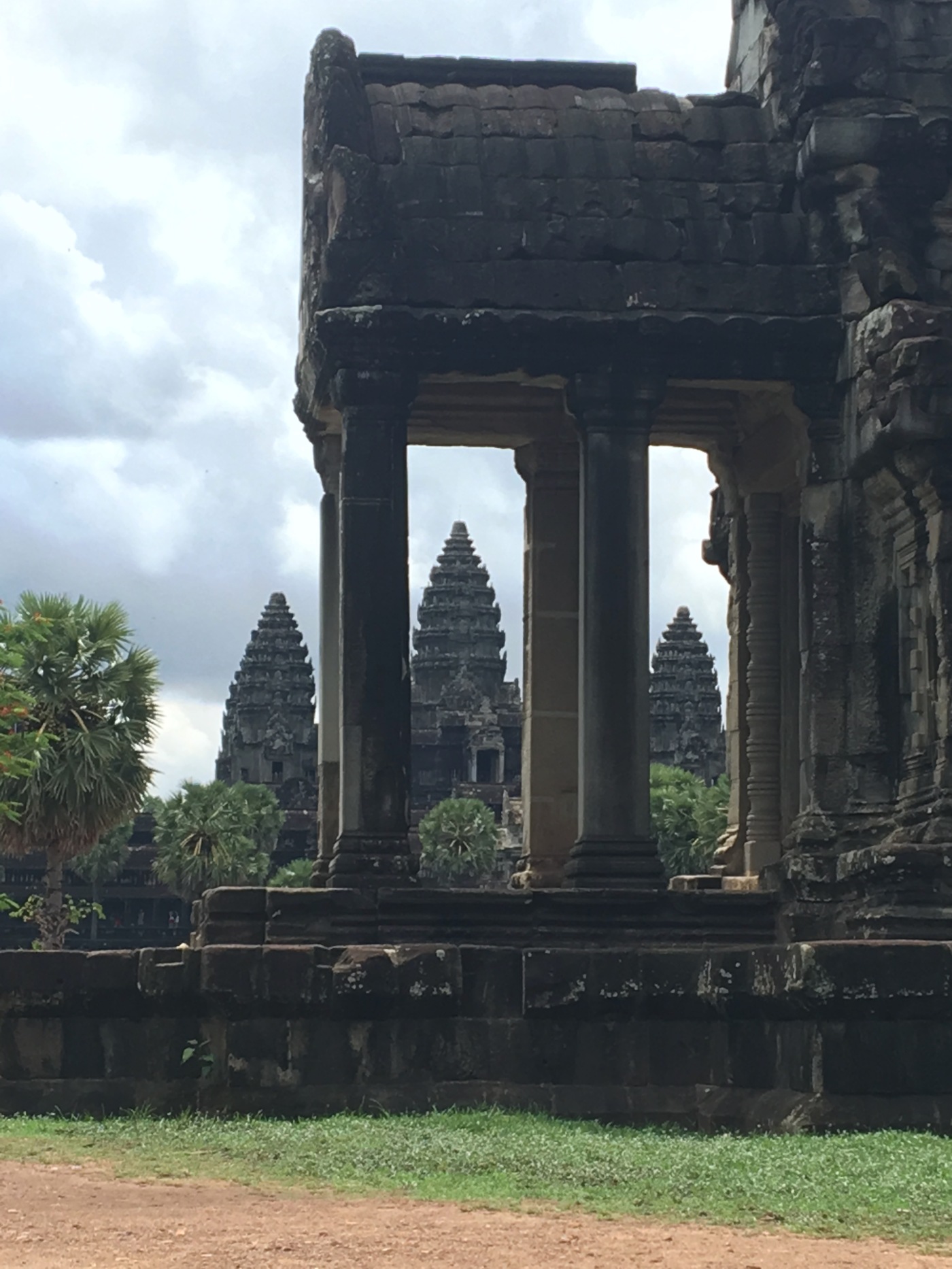 For my father and I, escaping to Siem Reap for Memorial Day Weekend was a welcome respite from Bangkok’s perpetual hubbub. Even though we had grown used to the crowded, chaotic, and steamy streets of the city, we appreciated the change of pace in the quaint and sleepy river town. Siem Reap has a long history, but it wasn’t until Angkor Wat was named a UNESCO World Heritage Site that it started to attract international tourists (like us).

An influx of visitors proved to be a boon for the Siem Reap economy, and as luxury hotels and gourmet restaurants started popping up next door to monasteries, the village grew bigger and wealthier in response. As more resources became available to the government, it became possible to devote more and more to maintaining the historical sites. Guests, after purchasing a pass, are now allowed to wander the grounds with guides, and explore a massive collection of newly restored religious sites. Being among the temples is unforgettable. If you can escape the selfie-stick wielding crowd (good luck with that!), you will feel as if you’ve gone back 750 years in time.

We spent our first full day doing just that — visiting the sites and immersing ourselves in them — with the company of a thoughtful, well-spoken guide. He knew his stuff, and almost as importantly, he knew where other tourists would (and wouldn’t) be. Because it was just my father and I, the three of us were able to navigate the grounds with relative ease and successfully avoid the crowds. Instead of following the masses to and fro, our guide took us off the main circuit and into Angkor Wat through “the back door.” After traversing a swampy trail through dense woods alone, we came upon the first temple.

After walking a few hundred yards, we came to Angkor Wat “in earnest.” The jungle cleared to reveal the site. More amazingly, sans a few monks, it was completely deserted.

As our trio approached the entrance to Angkor Wat, it became impossible to miss the intricacies of the architecture. Every feature was cut from stone so precisely.

Adorning each panel between the columns pictured above are detailed carvings, depicting great battles in Cambodian history. Remarkably, no two are the same, and collectively, they form a storyboard of sorts.

We continued moving inward to the center of Angkor Wat.

The details continued to impress as we approached the stupas.

From there, the guide invited us to climb the stupas to enjoy an elevated view of Angkor Wat and to better appreciate its, for lack of a better word, sprawl. We started running in to the crowds by this point — it was the late-morning already — and while the line to get up the steep steps was longer than what we would’ve liked, people were surprisingly dispersed up at the top. We had room to move about and survey the area (and take pictures too).

Some of the windows were lined with small, intricate columns serving as barricades between the interior and the (potentially harsh) elements outside.

Some of the “windows” were unfortunately in disrepair…

A number of shrines to Buddha stand at the top of Angkor Wat too. While there are many temples in the area, some of the more opulent ones are located here. They’re certainly better preserved, as they’re not as exposed to the outside world.

While Buddha may not look particularly impressive above, it’s what surrounds him that attracts attention. There are more stone “storyboards” carved into the interior walls.

My father and I climbed down from the top, and as we made our way to the front of Angkor Wat to start our trek to the next site, we passed through the center of the complex. The structure at this level feels almost like a citadel, given how imposing the architecture is.

From afar, Angkor Wat is just as stunning as it is close up. It’s just so expansively grand.

As we continued to the next temple, Bayon Temple, we came upon a funny juxtaposition:

Bayon Temple has a much smaller footprint than Angkor Wat, but it’s arguably just as impressive. There are several hundred carvings of Buddha’s face, many of which are more than 10 feet tall and 8 feet wide. In other words, he’s omnipresent, including when you first enter the grounds. His likeness lines the paths leading inward…

…and the walk towards the center culminates with a towering arch.

Unfortunately, site robbers and erosion have damaged Bayon Temple. While restoration projects are well underway, there’s still a long way to go before the grounds look as they did when they were first built in 13th century. There’s no confusing which Buddhas were decapitated by thieves. Some statues have much newer heads — like in the photo above — or some just stop at the shoulders. It’s a tragedy — everybody should be able to appreciate the art in its original grandeur — but you can learn more about UNESCO’s preservation efforts here.

Like Angkor Wat, a number of stupas characterize Bayon Temple’s outward appearance, although the ones here are closer together and exclusively adorned with Buddha. The latter is also far more condensed than the former, making navigating the site a bit more challenging. Walkways are narrow and require walking single file, uneven and broken surfaces make visitors vulnerable to tripping and ankle rolling, and at times, it feels as if you’re disoriented in a maze of Buddhas.

While there are some stone carvings in the columns and walls, it doesn’t compare to Angkor Wat’s seemingly never-ending collection. That’s not to say this isn’t cool though…

When in the center of Bayon Temple, Buddha completely surrounds you.

Kudos again to our guide for keeping us largely away from the crowds. It was nice being able to explore largely in solitude and appreciate the sights in a less chaotic environment. Although, we did run in to one visitor before leaving…

After wrapping up at Bayon Temple, our guide took us to Ta Prohm, which, unlike the other two sites, is largely in ruins and overrun by nature. It’s a popular site for locals and tourists alike; a group of monks were walking to pray at the same time we arrived.

We passed through some outer walls…or rather, what used to be outer walls on our way in to the complex.

We approached a smaller temple within Ta Prohm’s walls, and we thought it seemed to be in relatively good shape…

…until we saw the other side!

Ta Prohm has a large footprint like Angkor Wat, but like Bayon Temple, actually moving around it is rather challenging. In addition to a surprisingly complex network of corridors, many of the walking surfaces are craggled with stones, while patches of mud and grass and tree roots grow in between. It’s at places like these where you really appreciate having a guide! It makes enjoying and exploring that much easier, and we never had to ask “wait, where are we?”

Finally, we came to an inner part of Ta Prohm in which a number of structures (and trees) were situated around.

The buildings are in better condition than the outer walls are, although many appear to be losing a struggle against the jungle growth. Trees wrap around the foundations, and in some places, outright grow over top the structures there. It’s cool.

I found the tree roots to be fascinating. They’re hundreds of years old, and have completely adapted to and overrun man’s work.

…And the trees they support are huge!

Before we left, our guide pointed out that Ta Prohm was used a shooting location for Angelina Jolie’s film Tomb Raider.

So if anything looks familiar, it’s because…

And with that completed, our guide led us out of Ta Prohm and concluded our tour. It was an afternoon well, well spent!

Angkor Wat has a cheekier side to it as well. Just outside of Siem Reap, there’s a small mini golf course inspired by the UNESCO World Heritage site. Aptly named “Angkor Wat Putt,” it delivers a whimsical experience of golfing among the temples… or something like that! My father and I went out there for a morning, and it was good fun before we left to return to Bangkok.

If you call in advance, a tuk tuk from the golf course will pick you up from your hotel to go play. It’s a good value; it’s free transportation!

On the way back, I took a time-lapse!

It was a bumpy ride, but all in all, I’m happy to have had this quirky experience to complement the full day with the real temples.

Elsewhere, Siem Reap is very much a lazy river town. There aren’t too many cars on the streets — barring short periods of rush hour — and life seems to move at a much slower pace. It’s a relaxing place to be, especially after spending more than a week in a city like Bangkok.

With all the green space, you’re constantly reminded that you’re in the middle of the jungle. Getting caught in a sudden downpour is also another reminder of such (this is the voice of experience speaking too!). Beyond that though, there’s a commercial area near the river, and while the stores on the strip are nice, it seems to be in need of a little bit more investment.

But otherwise, this was a pleasant neighborhood to wander around in. There wasn’t a lot of traffic… or really anything else going on, but shops were open for business and had special, regionally-inspired trinkets for sale.

On the way out to the airport, we passed by a restaurant I wasn’t expecting to see: Pyongyang Restaurant.

Allegedly, this restaurant functions as a money laundering agency of the DPRK’s government, and despite everything, the Pyongyang Restaurant chain (they have branches all throughout Southeast Asia) is hugely popular with South Korean tourists. Also, they serve dog casserole; it’s not a recommended menu item. Click here to learn more all about it.

Like the Exploring Bangkok photo series, I’ve chosen to feature some older subjects from Angkor Wat and Siem Reap. The key difference lies in the overall atmospheres of the two locales though. You never forget that you’re in the 21st Century when you’re exploring the Big Mango; not always so when you find yourself amongst temple ruins! Siem Reap, for those experiences alone, is worth a visit.

If you want advice on which sights to see in Cambodia, feel free to contact me. I’m happy to provide tips based on my experiences.

7 thoughts on “At Angkor Wat and Beyond”