Former President Obama recently professed his preference/appreciation for Hampton Inns.  While they’re far cries from the penthouse suites he enjoyed during his time in office, there’s a certain comfort in the consistency.  As Obama put it (as quoted by The Washington Post), “In the Hampton Inn, there’s like one light switch, one bathroom door, and the bed, and the TV remote; I’m good.”  But there are thousands of locations (2,500 or so to be specific), and naturally, not all of them are created equally.  In the spirit of the former president’s comments, here are some of the top Hampton Inns for him to visit on his future trips.

The Obamas own a house in Washington, so perhaps staying in a Hampton Inn wouldn’t be necessary for Barack (but maybe if the power went out or something…).  If he did feel compelled to leave for whatever reason, there’s one property a couple of blocks from his former (white) home.  The distinguished exterior has equally nice suites to match, complete with wood paneling and flooring, great city views, and plenty of space to spread out (which can be a valuable commodity in Washington).  If this could work for a former president, surely it could work for anyone else looking to visit the Nation’s Capital.

When Obama wants to go back to his stomping grounds from his pre-presidential days in Chicago AND stay in a Hampton Inn, he has quite a bit of choices.  The most promising is conveniently located along the Magnificent Mile right in the middle of the city.  Furthermore, Obama was a community organizer in his past life.  Should he want to get back in to that line of work, there’s a tastefully-appointed gathering space where he could host large groups of people, and at night, he can retreat to a surprisingly spacious suite with solid views of downtown Chicago.

The Obamas have been known to vacation in New England, and while his usual favorite in Martha’s Vineyard isn’t the same as Bar Harbor, they’re both beautiful places near the water.  One of the most stunning properties in the Hampton Inn portfolio happens to be in Bar Harbor, so if Barack is looking to switch things up without doing anything too radical, here’s an option for him.  Many of the already bigger-than-average rooms offer even more living space thanks to the addition of balconies overlooking the water.  After a long day in the nearby Acadia National Park, a glass of wine with Michelle here could be the perfect way for Barack to unwind.

Maybe Barack, Michelle, and the kids want a beach vacation but would prefer to go south instead.  While the Outer Banks in North Carolina aren’t as dramatic as the mountains near Bar Harbor, there is a relatively isolated, attractive looking Hampton Inn ready for a (former) First Family on vacation.  This property is beachfront and sits relatively alone; there aren’t a lot of neighbors so neither you nor the Obamas would have to compete for a prime spot on the shore.  A lot of the suites are balcony equipped too, which are good for enjoying the ocean breeze without any of the sand.  Likewise, there’s a pool and lazy river complex for those who want a break from the salt water and waves. 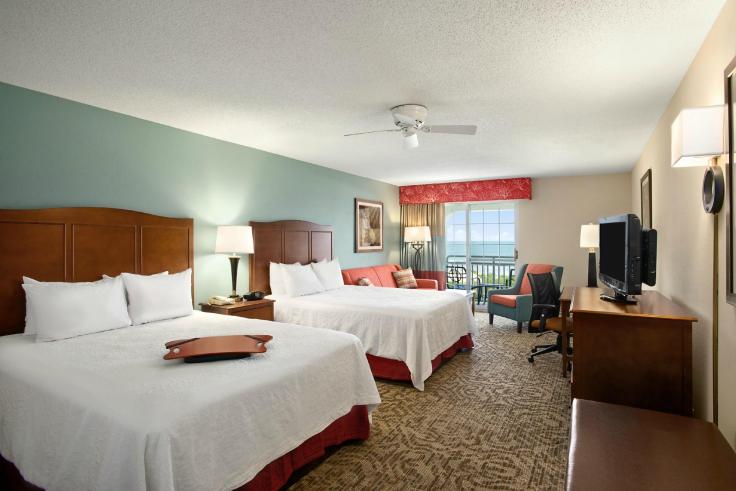 Not all beaches have to be in bucolic areas relatively far from civilization. Look no further than Miami if you’re intrigued and/or need any convincing, and if you’re Barack Obama, look at what Hampton Inn has to offer there. While the rooms at the property in South Beach Miami are relatively unremarkable — if you’ve seen any average Hampton Inn you’ve seen these kinds of rooms before — but this hotel occupies a beautiful Art Deco building on Collins Avenue in the heart of Miami Beach.  There are plenty of things to do near here for all tastes and ages, but after the sun goes down, the patio and pool up on the roof can host hopping parties.  A weekend getaway to South Florida may not be a near-60 year old’s idea of a good time, but hey, you never know what Obama could secretly be in to and this Hampton Inn could fit the bill.

If Obama were to go further south of Miami and in to Mexico — either for business or pleasure — he’d be remiss if he didn’t go to Mexico City, a chronically underrated city with a fantastic cultural scene.  There’s fine art, cheap, delicious food, and history everywhere, and The Hampton Inn in Mexico City’s old town combines all three.  It occupies a beautifully maintained historical building loaded with Old World charm, and if the exterior details aren’t impressive enough for the former president, the massive stained glass ceiling might change his mind.  Elsewhere, the rooms are surprisingly spacious (old buildings and lots of space to move around aren’t usually associated with one another) and like any self-respecting Hampton Inn, there’s a complimentary breakfast buffet that, as a bonus, has been known to offer an excellent spread… Perfect for a discerning presidential palate! 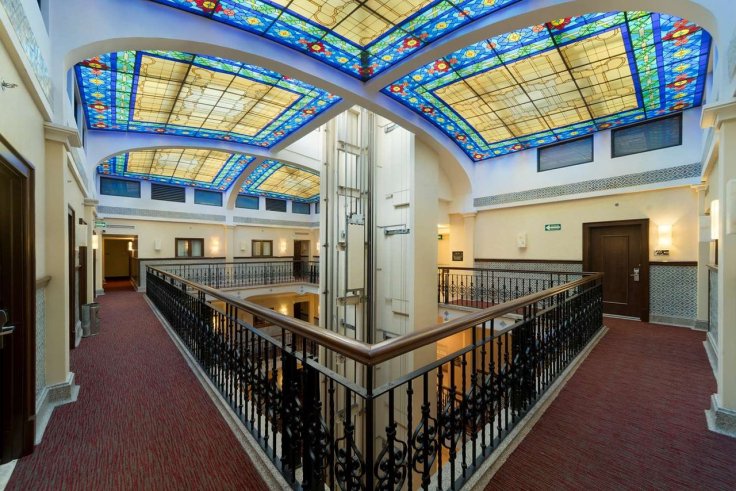 On the opposite side of Mexico to the north, there’s an expansive portfolio of consistently respectable-yet-utilitarian Hampton Inns.  Most are comparable to their American counterparts in the sense that they’re never going to be considered “five-star,” although some, like the one in Vancouver, offer quite a lot for not a lot.  This location is within walking distance of most anything that anyone, Obama included, would want to see during a visit to one of the great cities of the Great North.  A lot of the suites at this property feature grand, panoramic views of the city and of the mountains in the distance.  It makes for an ideal setting to be productive before a day of meetings (the free breakfasts can help with that too) and a relaxing one at the end.

The ongoing Chilean civil unrest extends to the lesser-known port city of Antofagasta, so while going there right now might be a little bit dicey for Barack Obama and his family, it could also be quite the adventure.  Even once the protests settle down, Antofagasta, known as the “Pearl of the North,” could offer a lot to the family.  There’s a beach, but the rugged Andes Mountains running through the region lend themselves to exquisite natural views that look like a moonscape.  Most importantly though, there’s even a Hampton Inn that, with beautiful ocean views and a rooftop bar and restaurant, could provide quite comfortable accommodations for the Obamas.  Interestingly enough, this is one of the nicest Hampton Inns in the portfolio, and it’s definitely one of the most exotic! That alone certainly warrants a visit.

While Antofagasta might be a little bit too far on the frontier, back in the United States, there’s another great Hampton Inn in one of the coolest cities in the country:  Austin, Texas.  There are several locations in the area, but the most interesting one, and the one most-worthy of attention from the Obamas, is near the University of Texas’s campus and the State Capitol.  Its interior design harkens back to Texas’s country western roots, but there are edgy, street-styled murals in the lobby as a nod to Austin’s counterculture scene.  The rooms themselves are spacious too and have great views of the town.  Fittingly, there’s a lot to do nearby and nothing is too expensive either; it’s a college town after all! 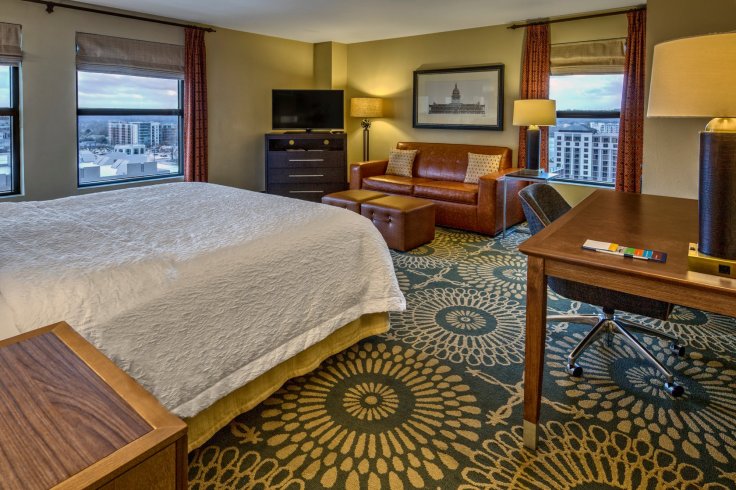 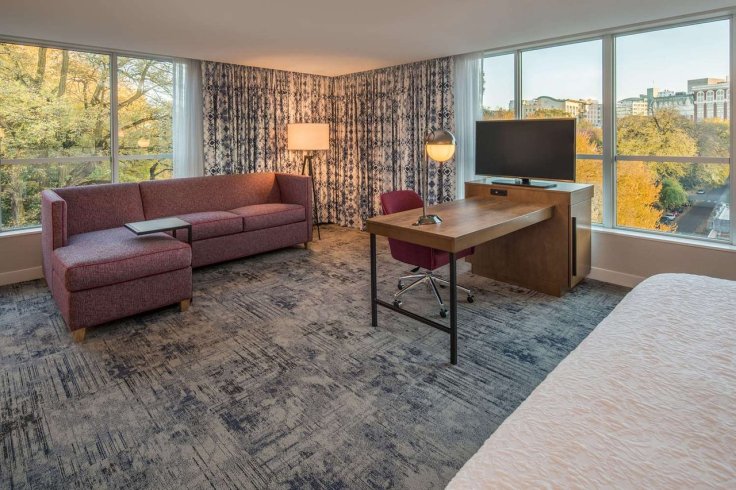 Another cool American city, Portland, Oregon, is home to another uniquely-styled Hampton Inn.  This one is decidedly “Pacific Northwest”, and floor-to-ceiling windows in (relatively) richly-appointed suites overlook a beautiful park in Portland’s renowned Pearl District.  The rooms are cheap, but during a stay here, you wouldn’t be able to tell.  There are five star restaurants within walking distance and some of the best breweries in the country, but if the Obamas prefer to stay in, there’s a rooftop bar complete with a fire pit and stellar city views.  I don’t know why the Obamas would want to spend all their time at the hotel though, as nice as it is; they’re hugely popular in Portland (which is another reason why this place would be worth a visit for them).

These ten Hampton Inns may not be the most luxurious, but they’d certainly do the trick for everyone… including the Obamas!  At times, all of these hotel rooms cost less than $100 per night (although they could be higher during peak tourist seasons), so the value for the money is undeniably good.  Just because “Hampton Inn” doesn’t evoke images of luxury like the way “St. Regis,” “Park Hyatt,” or “Four Seasons” do, that doesn’t mean they’re bad hotels; this list confirms that.  These ten can all be considered “higher flyer,” and for that reason alone, they are worth considering when either you or the Obamas are planning a trip.