Coronavirus claimed FlyBe. Who’s next? What’s next? That remains to be seen…

Happy St. Patrick’s Day!  Welcome to the eighth edition of “The Daily Flyer,” The Higher Flyer‘s daily newsletter gathering up and summarizing some of the day’s most important happenings in the world of airlines, hotels, award points, and other travel-related things.  Today’s feature — for March 18, 2020 — covers the fall of FlyBe, the role of coronavirus in the collapse, and the future that this outbreak could bring.  In addition, read on for coverage of a a political thought piece (of sorts), a follow-up to United’s repeatedly revised refund policy, and an amusing play on negative Yelp reviews.

Header image of the FlyBe plane courtesy of Sebastian Mortier; accessed on Wikipedia.  Coronavirus graphic courtesy of the CDC.

The COVID-19 outbreak is shutting the world down, and airlines in particular are being hit really, really hard by it.  On March 6, Southwest CEO Gary Kelly likened the current situation to the one following the September 11th attacks in 2001.  It’s clear that in the eleven days since his assessment, things have gotten far worse than they did in the immediate aftermath of the deadliest terror attack in human history.  There’s been a sharp, worldwide decline in bookings, and with demand and revenue (understandably) plummeting and fear rising, we’re at the point where the president of the United States is pledging support for U.S. carriers (and the Government of Italy is nationalizing Alitalia!) in order to reassure stakeholders.  Compounding these insecurities is the pace at which developments are breaking; surprising announcements come frequently and headspinningly quick.  What will happen tomorrow or the day after is unclear, and prediction-making is a futile effort.

Last week, Skift published an article entitled “Coronavirus is Pushing Some Airlines to the Precipice” that foreshadows this industry-wide turmoil.  It’s been a scary few weeks for airline employees, and the reasons causing it warrant a closer examination.  Let’s explore some of the more notable ones, starting with…

Get ready for some rather stunning flight loads.  This was from a recent United flight from Washington Dulles to London Heathrow… and United’s doing better than most.

So, none of that is good, but what else is going on?  What’s happening as a result of these rapidly changing times?  Well…

And of course, these developments have more-or-less been influenced within the industry; the causes and effects of them are relatively limited in the grand scheme of affairs.  Some airlines are better run than others, and those are going to be the ones that are better equipped to weather tumultuous times.  Who succeeds and who fails is determined mostly by just that:  how everyone else is doing.  However, such relative financial stability for doesn’t necessarily guarantee immunity from feeling the hurt right now.  There are other important factors at play after all.  One prominent one comes to mind:

As managing the coronavirus outbreak takes on an increasingly greater geopolitical importance — in order to prevent this from escalating in to a truly global pandemic, governments are going to have to get increasingly more involved with containment efforts — airlines might get caught in that “crossfire.”  Canada just closed its borders to everyone except for Canadians and U.S. citizens.  By limiting foreign travel, it has joined a growing number of countries enacting similar measures.  Complicating matters is that standards change on a daily AND an inconsistent basis.  Look at the United States, which seems to be finding new ways to bungle policy rollouts every other day.  Or Kuwait, which took the drastic measure of shuttering its airport entirely.  All this put together, as well as whatever happens after this writing, will further discourage travel and further drive down demand, thus putting greater strain on airlines and their bottom lines.

To conclude, there is so much going on and it’s hard to keep track of it all (check out One Mile At A Time for perhaps the most comprehensive coronavirus news round-up on the internet).  News is fluid and unpredictable, and having so much uncertainty up in the air (pardon the pun) is scary.  But, John Walton, a popular aviation journalist, summed it up the best.

Times are troubling for all of us in aviation. My heart is with everyone losing work, worried about the future, concerned about friends and family, and uncertain about what’s in store.

Together, this industry we love will survive — and rebuild. Stay strong. #AviationSolidarity pic.twitter.com/pJkbXMLO49

Panicking is wrong — at its most primitive level it’s damagingly unproductive — but know that it’s okay to worry about the coronavirus outbreak.  In fact, it’s better when people are concerned, because that inspires everyone to take those necessary precautions, to travel only when it’s necessary, and, most importantly, to be kind and considerate of others and their needs.  Be safe out there.  Things will sort themselves out as they should, and we’ll all be higher flying again soon enough!

This edition of The Daily Flyer was inspired by a Skift article:  “Coronavirus is Pushing Some Airlines to the Precipice” and has since been augmented by dozens of articles from all over the higher flyer-related internet.  Click the individual hyperlinks above for citations/the sourcings.  Consult One Mile At A Time‘s dedicated coronavirus portal here for a near-exhaustive source of information.

1.  “Do US Airlines Deserve A Government Bailout?”

If the main section of this Daily Flyer isn’t any indication, a lot, a lot, a lot of airlines are in dire straits right now.  This includes in the United States, and even though things there were unprecedentedly good a month ago, the COVID-19 outbreak has ensured that this is no longer the case.  The Airlines 4 America lobbying group, which represents Alaska, American, Hawaiian, JetBlue, Southwest, United, and soon, Delta, has called for a $50 billion bailout of the industry.  At face value, this seems like a good idea; the carriers cite the economic importance of the aid, as well as the benefits that several hundred thousand employees would enjoy because of this cash.  Morever, Trump recently signaled that he agrees with these points.  But, a few commentators argue that the government shouldn’t hand over that money so willingly.  Instead, it should advocate for regulations that are more customer-friendly, starting with more reasonably priced bag and change fees, and mandating minimum seat dimensions (eg airplane seats should be wider than they already are), among other things.  This all makes for an interesting thought experiment, and it’s worth the consideration of every higher flyer.  What do you think?

Sourced from One Mile At A Time, which was inspired by an opinion piece in The New York Times.

In keeping with everything moving so quickly, United has been tweaking its refund policy rather dramatically over the past 10 days.  First, it declared that it wouldn’t issue refunds unless it displaced/delayed your flight by more than 25 hours (!!!), and then, following a rather impressive backlash from customers, it announced that it would instead handle each case individually.  Reviewing each complaint proved to be too resource intensive — phone wait times were already brutal to begin with — so it then  reverted back to a hard and fast rule.  This go around United would refund you if it changed your schedule by six hours (as opposed to 25 hours).  Don’t get this twisted though:  prior to the coronavirus outbreak, United used to offer refunds if it delayed your arrival by more than two hours.

The airline didn’t stop with that though!  Now, for the fourth time since March 6, United’s changing its procedure.  If you are eligible for a refund (meaning that your flight schedule has been altered by six or more hours; that criteria has stayed the same), United will issue you a credit of equal value to your fare that’s eligible for a year.  After that period has elapsed, only then will it refund your original payment method.  Ugh!

Sourced from One Mile At A Time.  This has been a Ben Schlapping-heavy rotation, but not that that’s a bad thing!

Doom n’ gloom on the internet isn’t exactly a new phenomenon.  Poke around Twitter for about 15 seconds if you don’t believe me and, if you’re still feeling up to it after that, go to travel review websites like TripAdvisor and Yelp.  There are some really nasty trolls on those sites, and artist Amber Share has been using their rhetorical venom for… levity?  It’s quite clever; you see, the National Park Service occasionally promotes its parks using a distinct Americana-styled posters.  Here’s an example from one of the United States’s most famous national parks, the Grand Canyon:

With the help of a Yelp user who wrote that the Grand Canyon is just “A hole.  A very, very large hole,” as well as another who suggested that instead of going to Yellowstone, you could “Save yourself some money and boil some water at home,” Share took a different approach to designing and styling these posters.

Brilliant!  Here are few other good ones, with representation from Yosemite, Sequoia, Isle Royale, and the Great Smoky Mountains. 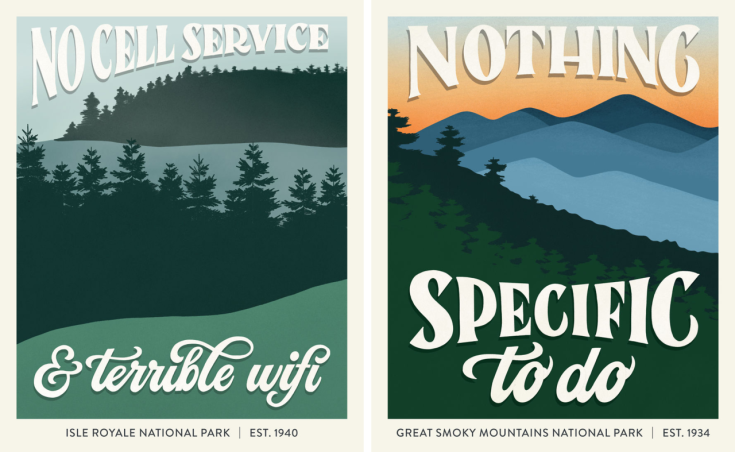 2 thoughts on “Coronavirus claimed FlyBe. Who’s next? What’s next? That remains to be seen…”