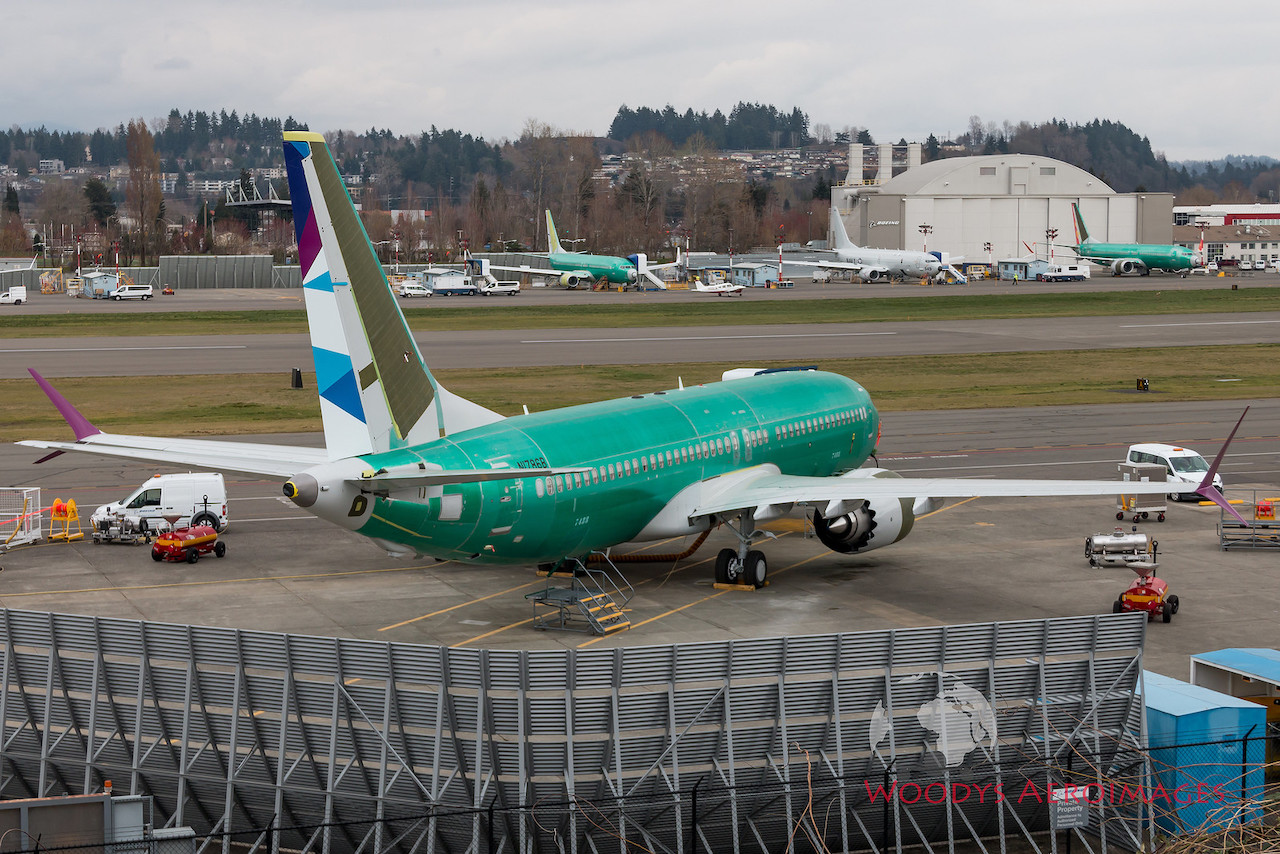 (Sorry for the spoiler. Let’s get to it!)

Happy (belated) Martin Luther King Day, and welcome to the January 19, 2020 edition of “The Daily Flyer!” This is The Higher Flyer‘s newsletter that gathers up and summarizes some of the day’s most important happenings in the world of airlines, hotels, award points, and other travel-related things. Today’s feature examines the Boeing 737 MAX‘s safety record as it returns to the skies, and it also covers updates to two popular loyalty programs, the next steps for Alaska and oneworld, AA’s other domestic alliance, and higher flyer steps to containing insurrectionists.

The header image — of a 737 MAX under construction — is courtesy of russianspotter; accessed on Wikipedia.

Let’s make this clear from the beginning: Boeing’s 737 MAX aircraft will be safe to fly once they return to commercial service. Here’s why…

When the first 737 MAX crashed — operated by Indonesian low cost carrier Lion Air — in October 2018, public condolences for the 189 passengers and crew on board were soon followed by a multinational investigation. Preliminary findings revealed faulty equipment to blame, but authorities weren’t willing to rule out pilot error either. As time passed, the tragedy gradually left the general public’s collective memory until five months later when an Ethiopian Airlines 737 MAX went down in nearly identical circumstances. This accident, considered in the context of the preceding one, triggered an international aviation crisis. The aircraft was grounded pretty much everywhere within a matter of days in March 2019.

Boeing has been struggling in the near-two years since and it’s been in a constant state of damage control too; its reputation is in shambles. It delayed its next-generation 777 project and it halted 737 MAX production while it tried to figure out why its planes would inexplicably dive back to Earth. A series of investigations meanwhile revealed a culture of gross negligence throughout all levels of the company AND the United States’s regulatory agency, the Federal Aviation Administration (FAA). The manufacturer ultimately bears culpability for the 346 people who died in the two crashes, and it’s been paying billions of dollars worth of fines (including one as punishment for fraud conspiracy) and settlements as a way to atone for its grave failures.

These financial penalties can’t remedy human loss, but Boeing at least appears committed to righting its wrongs. In late-2019 its board elected a new CEO who pledged greater commitments to transparency and safety — gone are the days in which aircraft are “designed by clowns supervised by monkeys” — and it has devoted significant resources to addressing the MAX’s engineering deficiencies. It identified defective software as the cause of the two crashes, developed viable solutions and then, most importantly, established a timeline for re-entry in to service. Boeing flew recertification flights in the second half of 2020, the FAA approved it for commercial operation in November, and, on December 29, American Airlines began flying MAXs within the United States. There haven’t been any reported issues thus far, and now that the European Union’s Aviation Safety Agency (EASA) has also tentatively given its thumbs up, it’s only a matter of time before the grounding is lifted everywhere.

These are undoubtedly positive developments — they are some the biggest reasons why Boeing will have a resurgent 2021 — but this story doesn’t have a happy ending just yet. Even though Boeing has resolved the issues that previously plagued the MAX, any disdain and skepticism for the manufacturer and its products is justified. Boeing cut corners with each plane it produced, management was well aware of these flaws, but yet some how, some way, they still carried passengers (including yours truly) across the globe. The company shamefully breached public trust while operating in a high stakes industry, but there’s reason to believe that this time is different.

Airlines nowadays are beginning to restore their trust in the beleaguered plane. Some have placed huge orders for MAX aircraft even after this years-long debacle, and on top of those fulfillments, Boeing has an existing backlog of about 3,700 models due for delivery in the coming years. Dozens of carriers own the 737 MAX already, and the number of operators will only be increasing with time. Accordingly, travelers should expect to fly these with increasing regularity, but they shouldn’t worry too much; their lives won’t ever be placed in danger.

The following may seem like a hot take, but it’s not: Boeing’s reformed 737 MAXs will become the safest, most reliable aircraft in the skies (measured by whatever metric you choose) and there will never again be a casualty caused by an MCAS-related glitch. Boeing’s engineers have diligently troubleshooted and reviewed the MAX’s suitability for service and, with the company’s fortune and reputation on the line, gave it the all-clear for it to fly again. Beyond that corporate endorsement, the FAA, the EASA, Canada’s Transport Canada, and China’s CAAC — among other regulatory bodies — are all working to verify the plane’s airworthiness. Given the high-profile nature of this case, inspectors are carefully scrutinizing the aircraft. Once it passes such rigors, it’s hard to imagine that a serious design flaw will go unnoticed.

Boeing nevertheless will be paying for its criminal negligence for years to come, and it will have to do all that it can and then some to reassure the traveling public of its successful reforms. A possible rebrand will only go so far in terms of positive PR, and whenever there’s the slightest hiccup, Boeing will have to answer questions regarding its reputability. But, studies have shown that the price of airfare exerts the greatest influence on consumers’ purchasing decisions. In practice this means that if a carrier operates a route with both a 737 MAX and an Airbus A320, many will (begrudgingly?) choose the former if it means significant savings. Perhaps we’ll see cheaper MAX fares as the plane returns to service, and it’s conceivable that this business strategy will pay off and encourage people to return.

Despite the various assurances from Boeing, regulators, and airlines, it’s okay to be wary right now — for the near future the MAX’s troubled history will be in the back of my mind every time I board one — but trust that any fears will likely subside… eventually. With each safe 737 landing going forward, the aircraft will fade out of the news and its once-faulty MCAS software will be forgotten by many. It’s easy to imagine that in ten years, this tragic, cynical, and frustrating saga will be a distant memory, and the MAX will . While Boeing won’t ever be able to truly make amends for the 346 victims of its negligence, it’s (and those who regulate it) doing all it can to ensure that no one else suffers that same fate; I’m confident that it will succeed.

This “Headline Feature” of the “The Daily Flyer” doubles as an entry in a mini trip report entitled “WNing on Southwest Airlines.” See below for a table of contents complete with links to the other posts. The remaining three articles — the “How to,” the review itself, and the subsequent critical analysis — are forthcoming.

From The Higher Flyer

In the time since “The Daily Flyer” was last published, The Higher Flyer, as it does on most Fridays, added to its collection of travel photography. While most entries in the “Photo of the Week!” series are sourced from past trips, this one was actually snapped that week (on Tuesday, January 12, 2021). I had to go to New York for an urgent errand, and New York’s Grand Central Station was looking particularly photogenic that evening. While the soft yellow lights were warm and inviting and becoming of the country’s most famous train station, black and white — a rarity in my photography — made for an effect that was even more striking. Check it out!

And from the archives: “Dr. King”

Yesterday was Martin Luther King Day, a United States holiday that honors one of the key leaders of the Civil Rights movement. In 2020, The Higher Flyer paid respect to the hero and his his legacy by dedicating a previous “Photo of the Week” installment, entitled “Dr. King,” the Friday before the holiday. The picture is below, and the descriptive write-up can be found here.

Four recent items from around the web that are worth a read.

1.  Marriott and Southwest publish new guidelines for qualifying for status in 2021

One of the supplementary articles in the last edition of “The Daily Flyer” referred to a View From The Wing post in which author Gary Leff laments/explains that we don’t yet know how to qualify for status on Marriott, Delta, or Southwest in 2021. Turns out that his post came a few days too soon, and both Marriott and Southwest have since released updated guidelines and incentives for members who are eager for elite recognition. Both companies are offering some lucrative opportunities, and the details of them can be found here:

Now if only Delta would follow suit (and make it easier to qualify for Diamond Medallion)!

Alaska Airlines is set to join oneworld at the end of March, but there’s still a lot that we don’t know about how it will engage with its soon-to-be partners. In a recent article, the cranky flier himself Brett Snyder analyzes how two new recently announced routes — Los Angeles-Austin, Texas and San Diego-New York JFK — will allow Alaska to cooperate with its peers in the transatlantic and transpacific markets. He cites a conversation he had with the carrier’s vice president of network and alliances, Brett Catlin, and relies on Cirium-provided data to bolster his assessments. If you’re in to route planning/management, potential higher flyer opportunities, or the state of affairs in the United States airline industry, this is a must-read.

American Airlines’s eager collaboration with Alaska Airlines has received lots of media attention — especially given the upcoming integration in to/within oneworld — while AA’s other “domestic partnership” with JetBlue has largely flown under the radar. While the latter may not inspire the hearts and minds of higher flyers, this partnership has the potential to be just as consequential as the former. The United States Department of Transportation just gave permission for the two to begin coordinating schedules and swapping slots at various hubs on the East Coast all without violating anti-trust laws. In practice for example, this means that AA will no longer fly single-class regional jets out of New York airports. JetBlue will pick up this service in American’s stead. What great news for passengers sick and tired of cramming in to all-economy Embraer E145s!

Sourced directly from an American Airlines press release. More high quality news and analysis can be found at Simple Flying. Consider reading a formal agreement submitted to the Department of Transportation as well.

The headline on Flight Global sums it up best: “US airlines gear up for potential trouble ahead of presidential inauguration.” In addition to a widespread firearms ban and harsher FAA penalties, the article mentions Alaska’s new measure that forbids passengers from moving about the cabin for the first and last hours of all flights to and from Washington. Similarly, AirBNB has preemptively cancelled all DC reservations during the inauguration week. Delta is going a step further by threatening lifetime bans on unruly travelers. It’s a shame that it’s come to this, but after the horrific events two weeks ago on January 6, it’s better to be safe than sorry.

Once the dust has settled (or not), a number of companies in the travel industry — such as Marriott, Hilton, AirBNB, and American Airlines, plus Boeing — have announced that they will no longer donate to political campaigns. Some, like Marriott, have targeted specific insurrectionists. The U.S. democracy has long been criticized for featuring price tags, but sometimes money talks for the greater good.

… And that’s it for today. Got any tips?  Questions?  Comments?  Email anything and everything to Paul@TheHigherFlyer.org, or comment below,  In the meantime, thanks for reading, fly higher, and see you on Thursday. Happy Inauguration Day in the meantime!